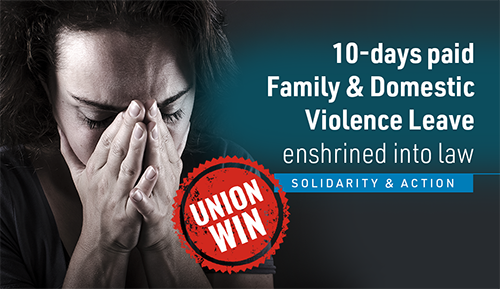 After a decade of tireless campaigning by unions and activists, the Albanese Government’s Bill to provide 10 days paid Family and Domestic Violence Leave (FDVL) has passed parliament and been enshrined in the National Employment Standards.

While successive coalition governments refused to support this entitlement, unions campaigned and won it workplace by workplace and then in Awards for an estimated 2.6 million workers. The union movement welcomes the support from the Labor Government and supportive Senators and Members of Parliament that voted in favour to make this a universal entitlement. This means a further 8.44 million workers, including casuals, will be eligible to take paid leave to support them with leaving a violent relationship.

On average, it costs $18,000 to escape a violent relationship in Australia and economic security is a key factor determining whether a person can escape a dangerous relationship. Paid Family and Domestic Violence Leave will help save lives.

“No worker should ever have had to choose between putting food on the table and their safety; and economic security is a key factor determining whether a person subjected to violence at home can escape a dangerous relationship or not. It cannot be understated just how important winning paid Family and Domestic Violence leave in the National Employment Standards is.”

“With 1 in 4 women having experienced some form of violence since the age of 15 by an intimate partner, Australia has a critical problem with women’s safety and gender equality. While today is a huge and historic win, union campaigning for gender equity does not stop here”.