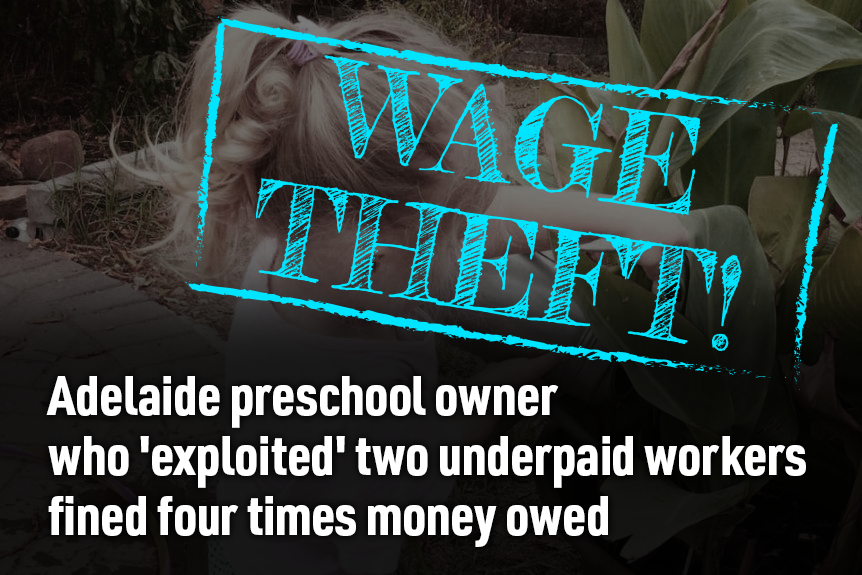 BIG WIN FOR THE IEU…

The operator of two Adelaide preschools has been fined $23,000 after she was found to have exploited workers for financial and business gain.

Kerry Black, the director of the now-defunct Accademia di Montessori, was found to have seriously contravened the Fair Work Act after systematically failing to pay two workers full wages, leave and superannuation.

The South Australian Employment Tribunal also found she made false promises, was uncooperative and continued recruiting despite owing money to current workers.

The penalty handed down was more than four times the total combined underpayment of $4,863.

It is believed to be only the second time an employer has been found guilty of a serious contravention of the act since an amendment increasing the maximum penalty tenfold to $126,000 for individuals was introduced in 2017.

The tribunal’s deputy president, Stuart Cole, found Ms Black “exploited” the two workers “for her own financial and business gain”.

“None of the contraventions are accidental or mere mistakes,” Mr Cole said.
“Little corrective action has been taken. There is no evidence that Ms Black is contrite.

“In my view, the pecuniary penalties to be applied need to send a message to Ms Black that she has statutory obligations to employees which are to be complied with.”

Independent Education Union secretary Glen Seidel said he was contacted by one of the workers for assistance about a year ago.

“We presented the claim to the employer and they just obfuscated all the way through the process and didn’t engage properly at all,” he said. “It was just a complete dog’s breakfast of contraventions.”

He said exploitation was common in the childcare and early-education industry and that migrant workers were particularly at risk.

“The workers are really quite vulnerable and you’re dealing with a profit motive in these situations,” he said.

“There’s always that incentive to try and pay as little as possible and extract as much as possible out of the business.”

Ms Black did not appear for the hearing on penalties, after previously appearing at the tribunal via phone.

Her business, Accademia di Montessori Pty Ltd, was put into liquidation in November 2019.

Ms Black will be liable for the penalties as a party to the case as the company’s director.

The West Croydon centre closed in early 2019 after its approval as a childcare provider was cancelled by the federal Department of Education, Skills and Employment for breaches related to fees and the Child Care Subsidy.