Enterprise Agreements – Breaking out of 2% offers… Vote NO! 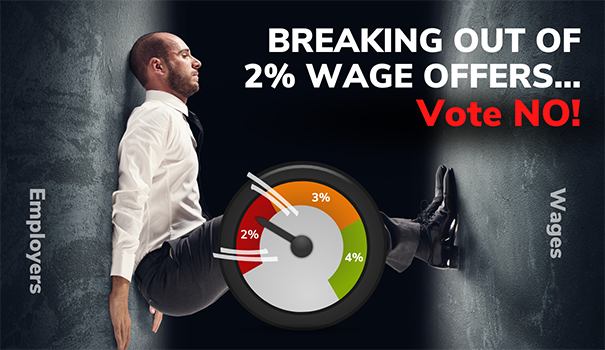 As the year screeches to a halt, we have reached impasses on the wages outcomes at some schools where overwhelming “NO” votes sent the message to employers that offers starting with a “2” or less just would not fly in the light of CPI figures of 7ish (or more) percent.

Walford, St Peter’s Woodlands and St Peter’s College have all had solid NO votes. Woodcroft is not far behind.

St Peters College has undergone several days of Fair Work Commission mediation to assist the resolution of the Bargaining Dispute lodged by the IEU. It is not certain if the compromise outcome will pass another vote or not. The next step is industrial action if this is not acceptable.

Nationally EA outcomes are emerging in the mid 3%s, which still means that wages are going backwards – just not quite as badly as it would otherwise.

Schools have received a 3.5% increase to their funding this year to cope with wage increase and other costs, but they have not proportionately applied that to wage outcomes when they are offering 2s.

Members must act collectively in refusing low-ball offers and not be rushed with artificial timeframes. Marry in haste and repent at leisure!

Increase the collective voice at your school, ask a non-member to join the IEU today