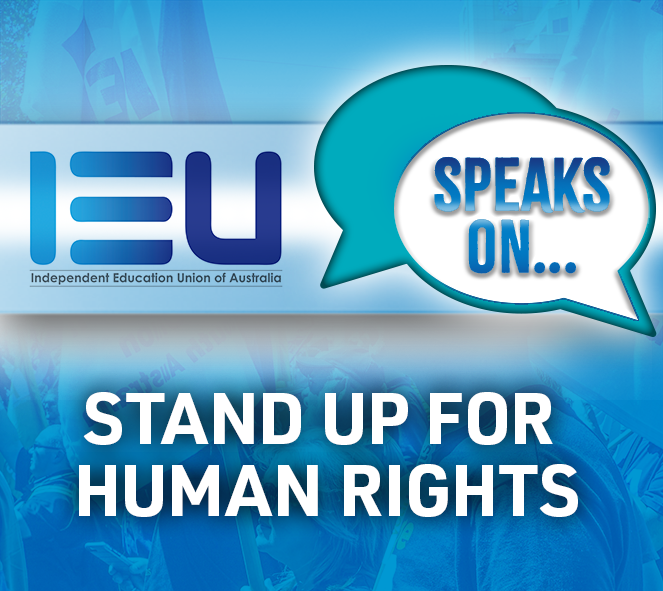 Where, after all, do universal human rights begin? In small places, close to home — so close and so small that they cannot be seen on any maps of the world. […] Unless these rights have meaning there, they have little meaning anywhere. Without concerted citizen action to uphold them close to home, we shall look in vain for progress in the larger world.  Eleanor Roosevelt

10 December is International Human Rights’ Day.  On this day in 1948, the Universal Declaration of Human Rights (UDHR) was adopted by the United Nations General Assembly.

The UDHR is a milestone document that proclaims the inalienable rights which everyone is entitled to as a human being- regardless of race, colour, religion, sex, language, political, national or social origin, property, birth or other status.

10 December 2020 provides an opportunity to reaffirm the importance of human rights and continue to fight for those who have had their rights denied.

Despite Australia being a vibrant multicultural country with far more robust democracy than other world democracies, our country has failed to provide many of the protected rights as documented within the UDHR.

Australia continues to fail First Nations’ People in protecting their human rights as documented under UDHR.

It is very likely that we will continue to see these unacceptable statistics unless the spirit, aspiration and dreams of the First Nations’ Uluru Statement from the Heart are recognised, welcomed and acted upon, thus.  ensuring that there is a stronger voice and recognition for First Nations’ people in the country’s legislature and constitution[3].

Across Australia, around 600 children under the age of 14 are imprisoned each year[4].

The age of criminal responsibility currently in Australia is 10 years and older.  This means that children 10 years or older can be arrested by police, remanded in custody, convicted by the courts and imprisoned.

While there had been a national push to raise the age, this was stalled after state, territory and federal attorneys-general determined more work was needed to be done to find alternatives to dealing with young offenders.

As a country we have witnessed reports about State/Territory actions on the use of solidarity confinement and restraints on children.

The COVID 19 crisis has deepened the twin crisis currently disadvantaging women: a shortage of good jobs, and an increase in the household caring burden.

In addition to the inequity, the impact of COVID 19 pandemic has seen an increase the risks in gendered violence, both at work and at home.  The pandemic is placing greater financial, health and domestic pressures on households, and at the same time increasing women’s isolation and reducing their financial and job security.

Despite this, the Federal Government has provided gender blind response to the country’s recovery.  It has failed to recognise and ameliorate the disproportionate harm the pandemic and recession has done to women and at the same time, it has made deliberate policy choices that will accelerate and entrench gender structural inequality.

The Federal Government continues to show disrespect and lack of care for women workers who are struggling with incidences of gendered violence by failing to take action on these two essential pieces of work; ratification of the ILO Convention on Violence and Harassment in the Workplace and adoption of the 18 recommendations contained within the AHRC Respect@Work Report.

Currently there are 600 refugees and asylum seekers remaining in Papua New Guinea and Nauru.  About 600 have been resettled in the USA under the Australia-US resettlement deal.  Of those remaining offshore, all are adults and most have been detained since 2013.

At least 12 refugees have died in Australia’s offshore detention since 2013, six of these have been suicides.

Self-harm and suicide attempts surged in PNG following the Australian election in May 2019, with media reporting dozens of attempts, and local authorities struggling to respond to the crisis. Medical facilities in PNG and Nauru are unable to cope with the complex medical needs of asylum seekers and refugees, particularly their mental health needs.  In February 2019, Australia’s parliament passed a law to facilitate transfers of refugees and asylum seekers requiring medical treatment from offshore locations to Australia. So far, 135 people have been transferred for treatment.   In December 2019, the government repealed the law. Those transferred to Australia remain in limbo, with no permanent visas and little support and are “warehoused’ in either maximum detention centres or in hotels in Melbourne and Brisbane.[5]

Australia has repeatedly rejected offers by New Zealand to take some of the refugees, with the government arguing that accepting the offer would encourage more boat arrivals as New Zealand is a “backdoor route” to Australia.

These refugees have escaped persecution and war, are separated from families, been detained in offshore detention camps for six years and now locked away in hotel rooms or maximum detention centres for over a year, with no end in sight.

Rising to the Challenge. Stand Up For Human Rights

As a country, we are a long way from attaining the universal human rights as documented by the UDHR.

As a union, we stand for the values of dignity, respect, social justice, fairness, equity and compassion.  These union values are articulated within the governing Objects of our Union Rules.

IEU members can stand up for human rights by

The responsibility lies with us as union members to stand up for human rights, to tackle entrenched, systematic and intergenerational inequalities, exclusion and discrimination and campaign for a fairer and more just country.