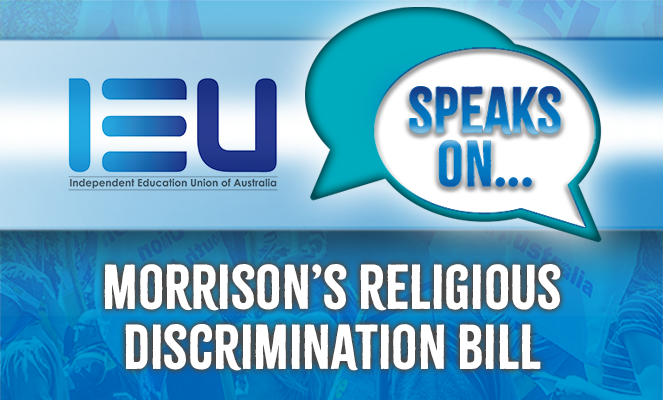 The IEU supports protections against all forms of discrimination, including religious belief or activity.

Everyone has the right to a safe, healthy, and respectful workplace regardless of religion, sexual orientation, sex, gender identity, disability, or other personal attributes.

Legislation should protect all of us, equally.

However, the Morrison’s Religious Discrimination has potential to undermine existing discrimination protections by prioritising religion over attributes and thereby overriding existing protections for women, people of disability, First Nation, LGBTIQ+

This proposed legislation purports to protect people from discrimination, instead it provides employers with new rights to discriminate.

The Religious Discrimination Bill 2021, if accepted will:

An Open Parliamentary Inquiry Is Needed

This is a complicated piece of legislation.  There must be time and opportunity provided for unpack the consequences of the legislation and its impact on vulnerable communities.

IEU members are able to call for this by: