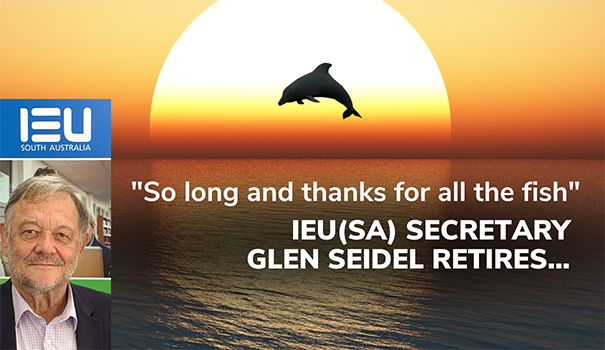 Some years ago I jokingly talked of early retirement at 70. That quasi-commitment is now knocking at the door and demanding to be honoured after waiting patiently in the wings for this moment.

As I hand back my copy of the Fair Work Act on the way out of the door, I take this opportunity for a moment’s reflection, but I promise to not bore you with maudlin sentiments.

In the year 2000, the union scene was a lot simpler and to move from honorary President to employed Secretary upon the retirement of Barry Morrison didn’t seem to be such a big deal.

In the state system, Enterprise Agreements were relatively simple documents with underpinning awards and industrial action was as simple as just “going out on the grass”.

I was pleased to be able to evolve our collective persona from “Association” (ATIS and ANGEE) to “Union” as we became the IEU(SA) with a state hat (IEU(SA)Inc) and a federal hat (IEU(SA)Branch). The federal entity is now our main operating mode as we present in Commissions and to regulators as the SA Branch of Independent Education Union of Australia.

We have a great team at the IEU. They have been supportive and dedicated colleagues and as much as Louise and I may take 40 years of corporate knowledge with us, there remains behind a significant depth and breadth of experience to carry on.

I will miss those daily interactions as we brainstorm the best approaches to a wide range of individual and collective issues. Union is a “people business” and these people are terrific.

As Tim Oosterbaan takes the baton from me, he won’t have the luxury of growing into the job over a couple of decades. He will have to hit the ground running. It used to be that someone from the chalkface could move straight into the role. These days, experience in the day to day operations of a union is essential. Tim has had such an apprenticeship and I have every confidence in his ability to take the union forward.

All the best, Glen.