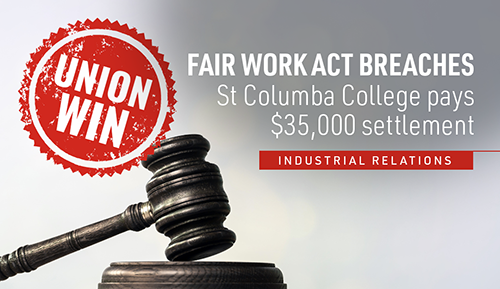 Employers are legally obliged to comply with employment conditions in their Enterprise Agreement (EA).

If Principals or others are “involved in” breaches, they can be fined personally.

After failing to heed IEU warnings, the IEU recently commenced legal action in the SA Employment Tribunal against St Columba College and its Principal, for failing to honour EA conditions about appointments to Positions of Responsibility (PORs).

St Columba and its Principal formally admitted to the Tribunal that they had breached the Fair Work Act, and agreed that the Tribunal should make orders confirming that, and recording that St Columba and its Principal would pay the IEU $35,000 and take corrective action. Given the admissions and remedial action, the IEU decided not to continue pursuing some of its original concerns.

The Tribunal’s orders are available here.

The school and its Principal, Ms Carr, admitted

Fines are imposed under the Fair Work Act to make employers understand that breaching workers’ enterprise agreement rights isn’t worth it. Other employers should take note and make sure that they are not breaching their legal obligations to employees like St Columba College and its Principal were.

Congratulations to the St Columba branch of the IEU for ‘calling out’ breaches of the SA Catholic Schools enterprise agreement and fully supporting action being taken.

Standing up for what is right assists all members, not just those at St Columba College.

This is an important reminder for all members – failing to implement EA entitlements is illegal.

The IEU will undertake corrective action if its members report such matters and employers ignore the warnings given.

If you believe an Enterprise Agreement entitlement is not being honoured at your school, contact your local IEU Rep or Organiser – 8410 0122 or enquiries@ieusa.org.au